This article will cover some of the key electrical concepts that you will need to understand if you are hoping to design your own solar PV system. The other articles on this website will assume that you have a good grasp of these topics.

Electric power is the rate at which electricity is transferred or used. It is measured in Watts (W).

The unit kilowatt (kW) is often used when talking about power. This is equal to one thousand Watts.

Solar panels are sold as having a specific power rating. You might buy a 250W panel, or a 300W panel for example. However, this is not the amount of power that they will always produce. Instead, it is the maximum power they can be expected to produce under standard test conditions (STC).

In reality, the power produced varies depending on how much sunlight is hitting the panels, what the ambient temperature is, and several other variables. On a cool day with high irradiance, the panel may actually produce more than its “maximum” power.

Energy is the amount of electricity used. It is measured in watt-hours (Wh).

As with power, it is typical to talk in terms of kilowatt-hours (kWh). Where:

For example:
Let’s consider you have three devices that each use 100W, and that you typically run these three devices for 10 hours each day. In a typical day, the total energy they will use is:

When sizing a grid-tied solar PV system you need to first calculate your yearly energy usage, and then design a system that will produce this amount of energy. (See our article How to Size a Grid-tie Solar PV System for more info).

In off-grid systems, as well as considering your usage and solar generation, you also have to correctly size your battery system so that it can store enough energy for when the sun is not shining.

AC (short for Alternating Current) is what is provided by the grid and supplied to the electrical outlets in our homes. It is used because it is easy to step up to higher voltages which is required to transmit the electricity over large distances without high losses.

DC (short for Direct Current) is used in many electrical devices, such as computers and mobile phones. Since household sockets provide AC, most electronic devices need an AC to DC converter to work.

Solar Panels and batteries produce DC electricity. That is why in a normal household, we need to install inverters in a solar PV system to convert the DC into AC. It can then be connected to the existing AC board of the house so it can either be used by the household or exported into the electricity grid.

Some off-grid solar PV systems can be set up to only supply and use DC. This gives the advantage of not requiring an inverter, saving costs and electrical losses. It is possible to purchase many different appliances that run off DC power, such as lights, computers, fridges and freezers, fans, pumps, and mobile phone chargers.

Voltage is the difference in electrical potential between two points. It is measured in Volts (V) and its symbol in electrical equations and datasheets is V (or sometimes U, depending on the country).

It is the amount of potential energy available per unit charge, to move charges through a conductor. A common analogy used to help understand this concept is to think of an electric wire like water in a hose. Voltage can be thought of as the pressure of the water.

The voltage of a solar panel is not fixed, and will vary depending on the intensity of the sunlight hitting the panel. It is also heavily affected by temperature. As the temperature of the cells in a panel increase, the voltage decreases. This also causes the power output of the module to decrease. The amount that the voltage changes with each degree change in temperature is called temperature coefficient, and can be found on the solar panel datasheet.

A solar panel datasheet will give several different voltage values. The two main ones are:

Voc (at STC) – Solar Panel open-circuit voltage at STC. This is the voltage the solar panel can be expected to show across its terminals when it is not connected to any other device, under standard test conditions (STC). This value is used in string length calculations.

The total voltage of a string must not go over the maximum voltage allowed at the input of the inverter or charge controller being used. The solar panels themselves also have a maximum system voltage that must not be exceeded. Typically the maximum voltage of the system is either 600V or 1000V (or 1500V in utility-scale systems). Typically residential systems will be 600V and in the U.S. the NEC sets this as the legal limit for dwellings with 1-2 families.

Note that 1000V solar panels can still be used in a 600V system. This is the maximum voltage they are designed to handle, so the 600V system will stay well below their maximum.

Current is the rate of flow of electrical charge. It is measured in amperes (A) or amps for short, and its symbol in electrical equations and datasheets is ‘I’.

When solar panels are connected to an inverter or charge controller, and are exposed to sunlight, current will flow. The higher the irradiance hitting the module, the higher the current it will produce. 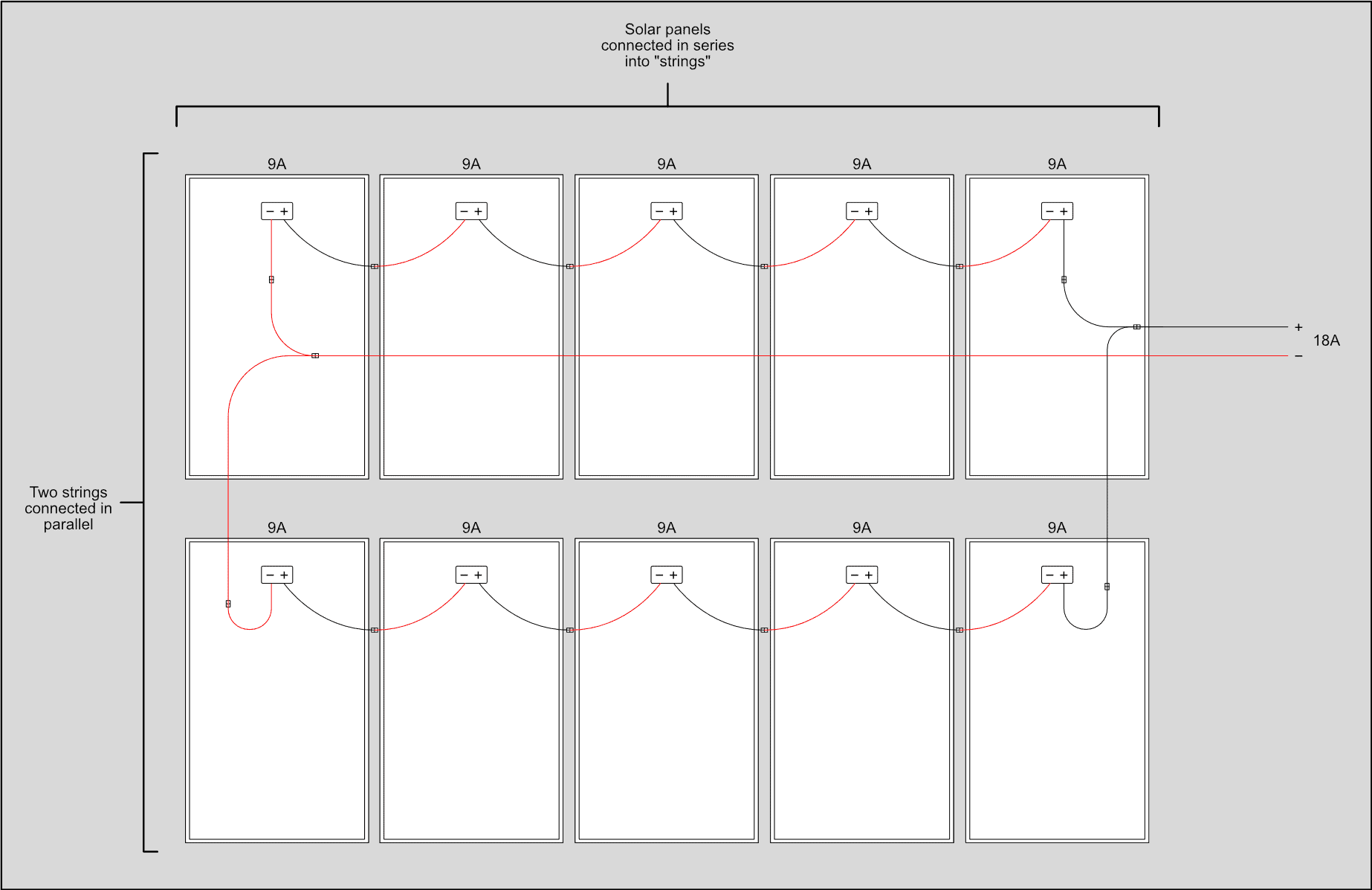 In solar (and other electrical circuits) current is important for sizing the cables and protection equipment (fuses and circuit breakers). As electricity is fed through cables they heat up. If more current is fed through a cable than it is designed for, perhaps due to a fault, it can get too hot and be damaged or start a fire. To prevent this, fuses or circuit breakers are used which break the circuit before the current can go above the limits of the cable.

Two important solar panel currents to be aware of are Isc and Impp.

Impp (at STC) – The maximum current a solar panel will produce at STC when connected to an inverter with maximum power point tracking (MPPT).

Are there any other basic solar concepts you would like to be covered here? Please let us know in the comments below.

This site uses Akismet to reduce spam. Learn how your comment data is processed.