An Introduction to Solar PV Systems

Solar power is currently the fastest growing source of electricity in the world. As the amount of solar installed has risen, costs have come down dramatically and solar systems are becoming affordable to more and more people.

But before you dive into getting your own solar PV system, it is important to first understand some of the basics of how they operate. This is obviously necessary if you want to design and install your own system, but is also very important if you are paying someone else to install it for you so you can better understand if the system is right for you.

If you are completely new to solar, this article is a great starting point, it will introduce you to the main components in a system, and how they all work together. It will also provide links to other useful articles to continue your solar education.

The core of a solar PV system is the solar panels themselves. When exposed to sunlight, the panels produce direct current (DC) electricity.

Off-grid systems on the other hand are not connected to any external grid, and must supply all of the power required by the house (or RV etc), that it is connected to. In order to continue to supply electricity at night or during cloudy periods, these systems include batteries to store the electricity generated by the panels. They also require a charge controller, which as the name suggests, controls the charging of the batteries. The setup of an off-grid system is therefore slightly different. Typically they will look something like the following simplified diagram, however this will vary depending on the setup. For example, systems using hybrid inverters, or DC only systems will have different arrangements.

How solar PV systems are sized

Solar systems are sized based on the electricity requirements of the house, the amount of available roof space, whether or not power can or should be exported to the grid, and many other factors.

First it is necessary to determine the expected electricity usage of your home, off-grid dwelling, or RV etc. Either through past electricity bills, or by adding up all your electrical devices and estimating how long you use each one (there are online calculators to help you do this).

The next step is to calculate the size of solar PV system which matches your electricity usage, while also considering what will provide you with the best return on your investment. How this is done will depend on the type of system you have:

Grid-tied systems sizing is heavily affected by whether it is possible to export electricity back to the grid, and how much the utility pays you for this electricity. When net metering is available (which is when utilities credit you for any electricity you export to the grid) you will typically size the system so that the yearly expected generation matches your yearly usage.

When you receive little or no compensation for electricity exported back to the grid on the other hand it usually makes sense to size the system so that as little is exported as possible. You therefore need to consider how your expected daily, weekly, and yearly load profile matches the generation profile of your PV system, to determine what size system will give you the best return for your investment. This can be done using online calculators specifically designed for the task.

Off-grid systems, including their batteries, are sized based on expected electricity usage, as well as how many cloudy days the system should be able to keep running through (days of autonomy). This can become quite complicated, but luckily there are many online calculators designed for this purpose, which make it quite easy.

It is possible to calculate how much electricity a solar PV system is expected to generate in an average year, although the actual output will vary from year to year depending on weather conditions. Rough calculations can be done by hand, or more accurate calculations can be done by using any one of the various solar calculators that are available to help you size your system.

Components of a Solar PV System

Solar Panels (sometimes called solar modules) are made up of a number of smaller silicon solar cells that convert sunlight into electricity. 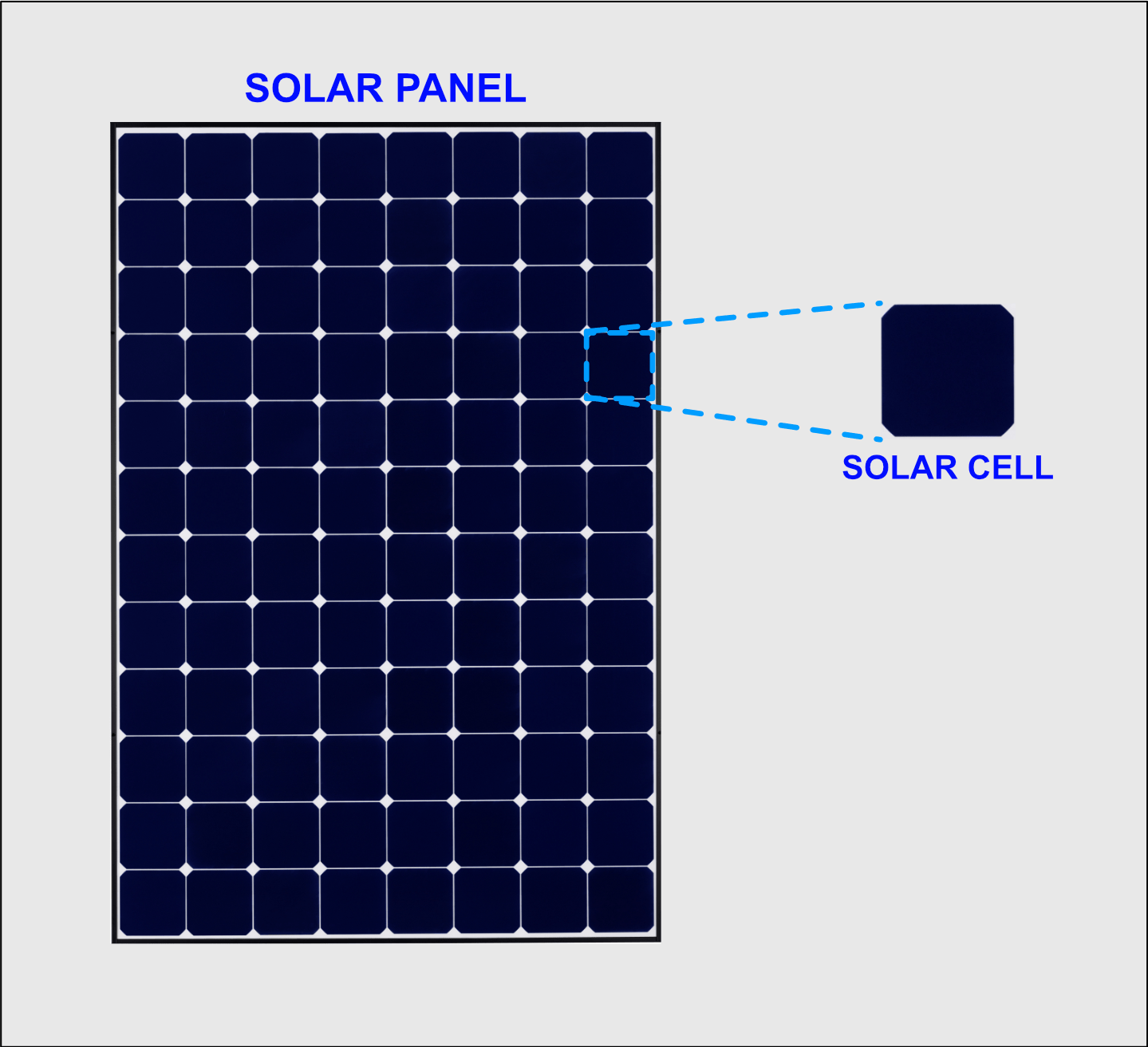 These are typically protected between a glass front sheet, and a polymer back sheet, with everything being held together by an aluminum frame. They usually come pre-assembled with cables so that they can easily be connected together and to an inverter.

Solar panels come in a variety of different technology types, colors, and sizes. Different solar panel types have varying efficiencies, which changes the amount of power that can be generated by a given area of rooftop. 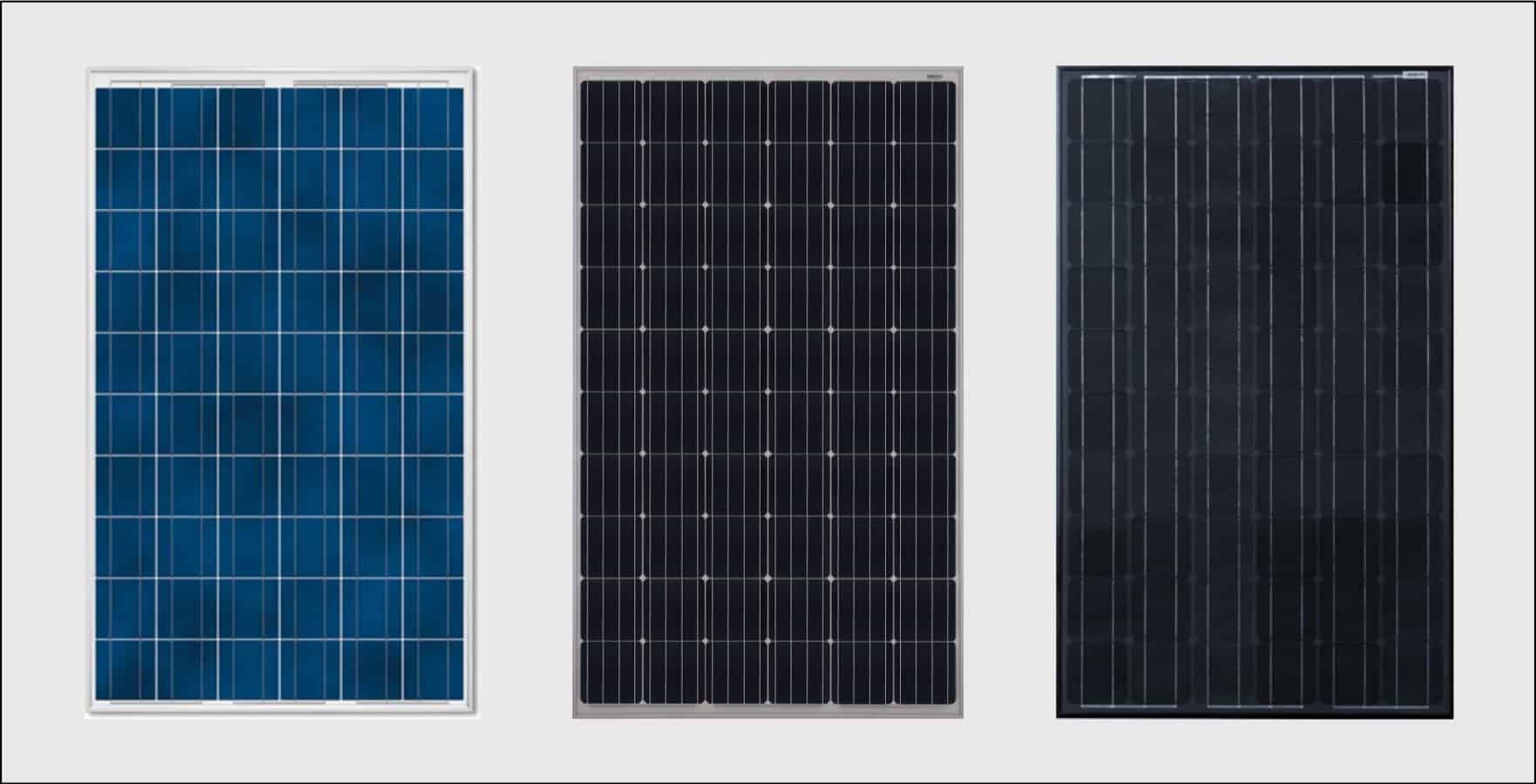 As you can see, not all solar panels look the same, and some have been designed to be more visually appealing to others. The trade-off is that these typically cost more than standard solar panels.

For more information on selecting the solar panel that is right for your project, check out our Solar Panel Selection for Grid-tied Residential Systems.

String inverters tend to be the cheapest option as there is only one device to install for many solar panels, they are also typically more efficient at converting from DC to AC electricity. One problem with string inverters however is that when one solar panel in a string is shaded or has its output lowered by soiling from dust, bird poo, etc, all the other modules in the string are also affected.

DC-to-DC optimizers are used to solve the issue of shading on one solar panel affecting all modules in a string. They are smaller devices that connect to just one or two panels and optimize the output of each panel or panels individually. As they still output DC electricity they still need to be connected to a string inverter to convert to AC electricity.

Since they optimize output at a module level, DC-to-DC optimizers can increase the total output of a solar system, especially one that is subject to a lot of shading or soiling. The downside is that they increase the system cost compared to using string inverters alone.

Micro-inverters are similar to DC-to-DC converters in that they optimize the output of solar panels at the panel level. The difference is that they also perform the DC to AC conversion so that no string inverter is required at all. Micro-inverters may be mounted externally to the solar panel, or even come integrated into the module in what is called an AC module. Using micro-inverters can greatly reduce the complexity of the system and therefore the installation costs, however, due to their higher price, still typically result in a higher price for the system overall.

Within each of these different inverter types, there are many different manufacturers to choose from, each with their own benefits, features, and downsides.

As well as converting the DC electricity from the sun into AC electricity, the inverter also performs other important functions, these include:

Including batteries in a solar PV system allows the energy produced by the solar panels to be stored for use after the sun goes down. They are almost always required in an off-grid system (unless another backup such as a diesel generator is available), however, there are also several reasons you may want to include them in grid-tied systems too:

Charge controllers are used when you want to include batteries in your system (and when you are not using a hybrid inverter).

They control the power going to the batteries, and may also provide the following functions:

We hope this article has given you a solid introduction to solar PV systems and that you are now excited to dive further into the details. See below for recommended articles to read next, or check our menu if you are looking for something specific.

If you have any comments, or suggestions for additions to this article, please leave a comment below.

This site uses Akismet to reduce spam. Learn how your comment data is processed.